I am excited to announce that Novell today released version 1.0 of Moonlight, and is making it available for download at no cost with support for most major Linux distro’s (including openSUSE, SUSE Linux Enterprise, Fedora, Red Hat, and Ubuntu). For those unfamiliar with it, Moonlight is a joint effort between Novell and Microsoft of an open-source implementation of Silverlight for Linux.

My team has worked closely with Miguel de Icaza and his team on the project.  We are also shipping the Microsoft Media Pack – which is a set of licensed media codecs that enable playback for all Silverlight compatible media (wmv, wma, mp3, etc.), as a free download for Linux users who run Moonlight.

Moonlight enables Linux users to view Silverlight content and Silverlight applications.  Recently the official Presidential Inauguration Committee broadcast the inauguration of President Barack Obama using Silverlight.  Over 50,000 viewers using Linux installed Moonlight and watched the event live using it.  Miguel de Icaza and the volunteers behind Moonlight made a tremendous effort to make sure that Linux users were able to watch the broadcast of the inauguration, even though the official release of Moonlight was still a few weeks away. 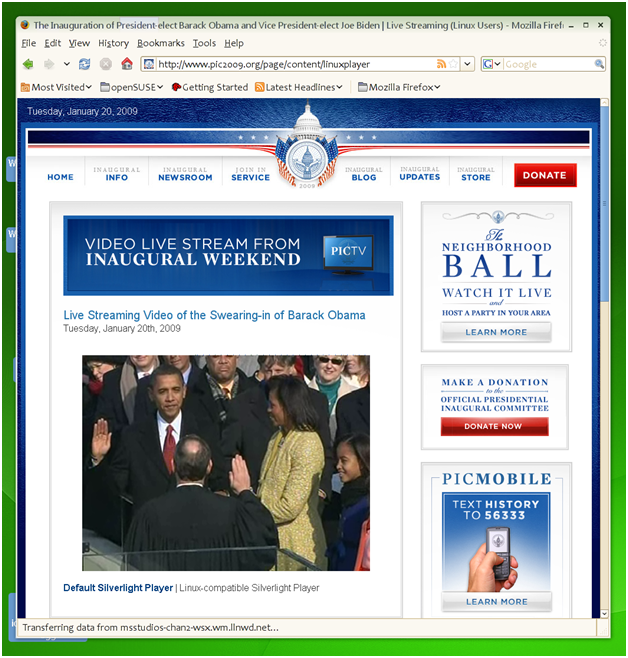 I am really excited about the awesome work Miguel and his team at Novell have done, and we’re looking forward to seeing Moonlight 2 (a Silverlight 2 compatible implementation with .NET support) which the team is hard at work on. For more details on the Moonlight 1.0 release, check out Miguel’s blog post on it.