This is the fourth in a series of blog posts I’m doing on the upcoming VS 2010 and .NET 4 release.

Today’s post covers one of the general IDE improvements that I know a lot of people are already eagerly looking forward to with VS 2010 – multiple-monitor support.

VS 2008 hosts all documents/files/designers within a single top-level window – which unfortunately means that you can’t partition the IDE across multiple monitors.

VS 2010 addresses this by now allowing editors, designers and tool-windows to be moved outside the top-level window and positioned anywhere you want, and on any monitor on your system.  This allows you to significantly improve your use of screen real-estate, and optimize your overall development workflow.

Taking advantage of the multi-monitor feature is really easy to-do.  Simply click on a document tab or tool-window and drag it to either a new location within the top-level IDE window – or outside of the IDE to any location on any monitor you want: 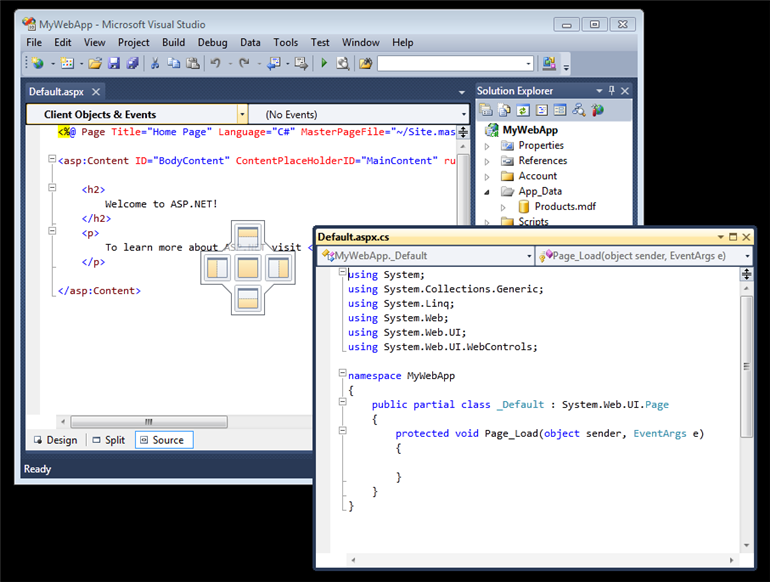 You can later drag the document/window back into the main window if you want to re-dock it (or right click and choose the re-dock option).

Visual Studio remembers the last screen position of documents when saved – which means that you can close projects and re-open them and have the layout automatically startup where you last saved it.

Below are some screen-shots of a few of the scenarios multi-monitor enables (obviously there are many more I’m not covering).  Pretend each window in the screenshots below is on a different monitor to get the full idea…

Demonstrates how code files can be split up across multiple monitors.  Below I’ve kept a .aspx file in the main IDE window and then moved a code-behind file and a separate class file to a separate screen: 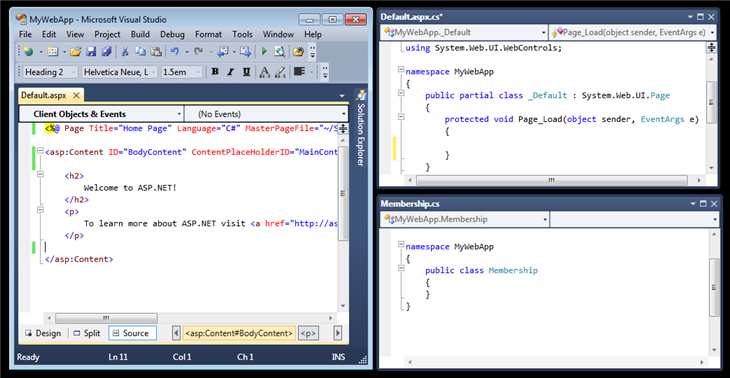 Demonstrates how any tool window/pane within VS10 can be split across multiple monitors.  Below I’ve moved the test runner tool windows to a separate screen:

Demonstrates how a designer within VS can be split across multiple monitors.  Below I’ve moved the WPF/Silverlight WYSWIYG designer and the property grid to a separate screen (the code behind file is still in the main window). Note how the VS10 property grid now supports inline color editors, databinding, styles, brushes, and a whole bunch more for WPF and Silverlight applications (I’ll cover this in later blog posts):

If you work on a system that has multiple monitors connected to it, I think you are going to find the new multi-monitor support within VS10 a big productivity boost.

If you don’t already have multiple monitors connected to your computer, this might be a good excuse to get some… :-)