I installed  Visual Studio Web Developer Express 2012 a while ago. I think during the same timeframe I also upgraded my Internet Explorer 9 to IE10. Now whenever I debug a project two instances of IE would start up. I did some search but couldn’t make it work. So I made Firefox as my “Default Brower” for Visual Studio.

So that was working fine and I totally forgot about it until today when I installed Visual Studio Web Developer Express 2013 Preview. When I created my first sample project and run the website I I not only started getting the two IE instances but also this error:

I started searching the web for the error and found similar question on stackoverflow.com As mentioned in there, I added IE(x86) i.e. 32-bit version to my VS browsers list and set it as my default browser. Now when I debug things stated working as normal. The error was gone and VS would launch only one instance of IE.

I went ahead and tried the same for my VWD 2012 and that now works normal as well.

Here are some screen shots on how I added the IE(x86):

1: Open Visual Studio and open a website project (Any it could be a new one project it doesn’t matter)

2: With that website select in the Solution Explorer … Go to – File->Browse With… It will open the following dialog: 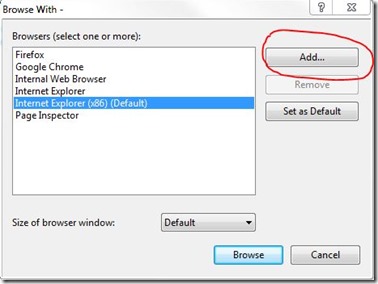 3: Click “Add” as in the image above and it will open another dialog as below:

4: Click “…” selector button next to the program which will open file Browse dialog as below.

Navigate to your / Program Files(x86)/ Internet Explorer folder and select iexplorer.exe as shown below 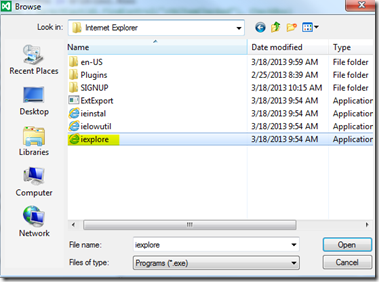 5: Enter a Friendly Name in the box as shown below:

6: Then set that newly added entry as default by using “Set as Default” button. 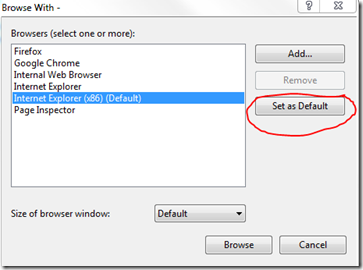