Later this week we are planning to publish updated downloads for both the VS 2005 Web Application Project Option and VS 2005 Web Deployment Project Utility.

You can learn more about the first preview edition of the VS 2005 Web Application Project on my web-site here (you can also read this blog post here for more information on the motivation for introducing this new option).  The first preview provided a number of the core features of the new web project-system option, and allowed people who didn’t mind doing some manual work to start using it.  I’ve also received a lot of positive feedback from people who have found it makes upgrading complex VS 2003 Web Projects really easy (because the compilation semantics are the same as VS 2003, most upgrades can be done in about 15-30 minutes).

The refreshed VS 2005 Web Application Project drop this week will add support for the most commonly requested missing feature in the first preview release – which is support for generating and updating the control field declarations for the code-behind class, as well as a number of other new features.

Installing the new build now allows you to-do the following: 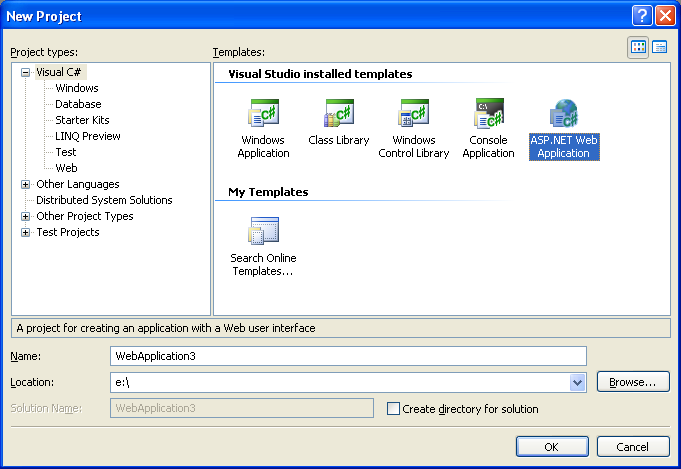 2) This then create a new project with a default.aspx page and web.config.  Note that VS 2005 Web Application Projects have the same project configuration as VS 2003 Web Projects, as well as standard class library projects (they also use a MSBuild based project file): 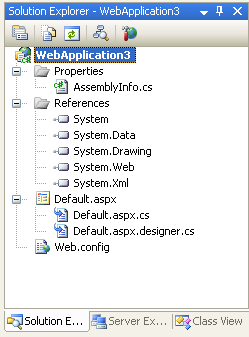 3) I can then open the Default.aspx page in either the WYSIWYG designer or source-view and add some static HTML content + controls:

4) If you look at the Solution Explorer in step 2 above you’ll notice that there are two .cs files associated with the Default.aspx page.  One is the code-behind file that contains the page class that a developer authors (this is the default.aspx.cs file), the other is a new file used to contain all of the tool-generated/maintained code for the page (this is the default.aspx.designer.cs file).  The class in both files is declared as a “partial” type – which means they are compiled together into a single code-behind class at compile-time.  You can read this tutorial I wrote at the time of the first VS 2005 Web Application Preview download to understand more how this works.

With the updated VS 2005 Web Application Project Preview we are releasing this week, the Default.aspx.designer.cs file will automatically be updated when you add/remove controls to your Default.aspx file.  Below is what the file looks like after I added the markup above:

Notice that there is a control declaration for each server control in the .aspx file.  By default the controls are declared as “protected” fields.  You can optionally open the .designer.cs file and change a field’s accessor to “public” if you want.  We don’t recommend this – since it is much better to declare a getter property instead.  But we added support for it starting with this preview drop because we’ve noticed a lot of VS 2003 Web Projects doing it, and we wanted to make upgrades as easy as possible.

We’ve also refined the code-generation of the field declarations in two other ways that provide big improvements over the VS 2003 experience:

a) It is no longer required for you to switch the page into the designer in order to update the control declarations.  VS 2003 required you to-do this – which meant that if you add/edit/rename controls in source-view you are forced into loading the page in design-view to have the code-behind declarations update.  With the VS 2005 Web Application Project option we monitor both source-view and design-view, and update the declarations appropriately.

b) VS 2005 now honors control fields declarations in the base class of a page, and will not duplicate them in the code-behind file of the page.  VS 2003 had problems with this that required manual editing – with the VS 2005 Web Application Project option we manage this for you automatically.

5) Because the .designer.cs file is automatically updated with the control declarations, I can now just go directly to the Default.aspx.cs code-behind file and program against any of the controls on the page: 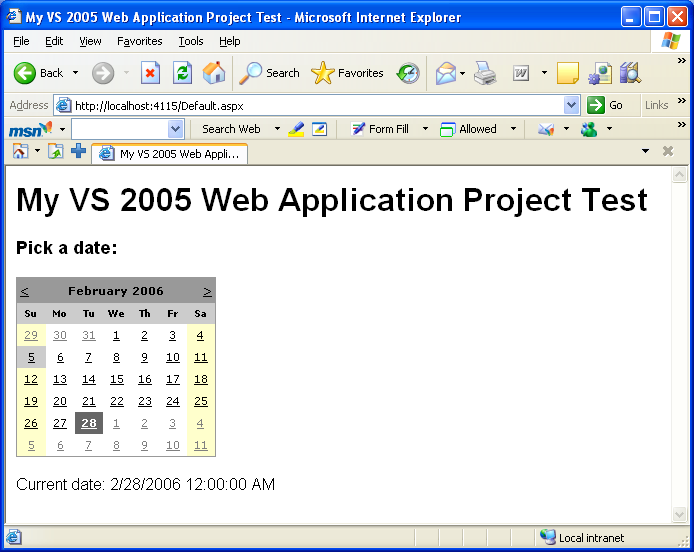 7) I can customize my new web project settings using the same project options screens supported by client-library projects in VS 2005 today (just right-click on the web project node in the solution explorer and choose the “Properties” menu item): 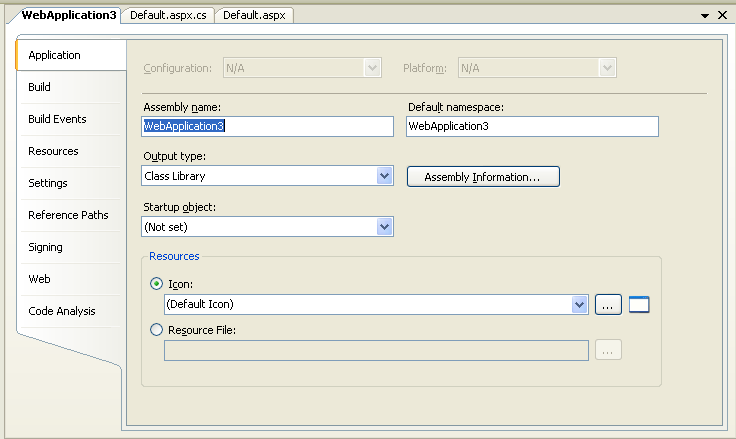 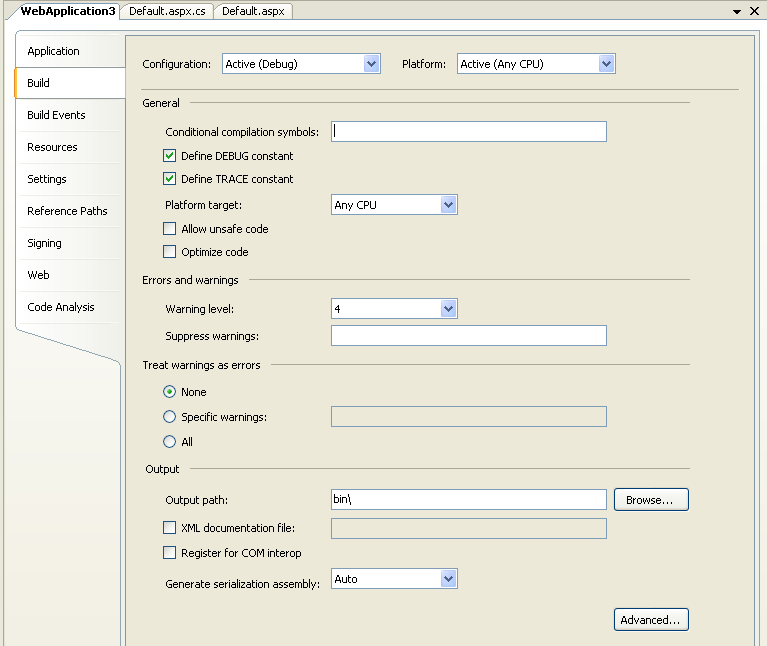 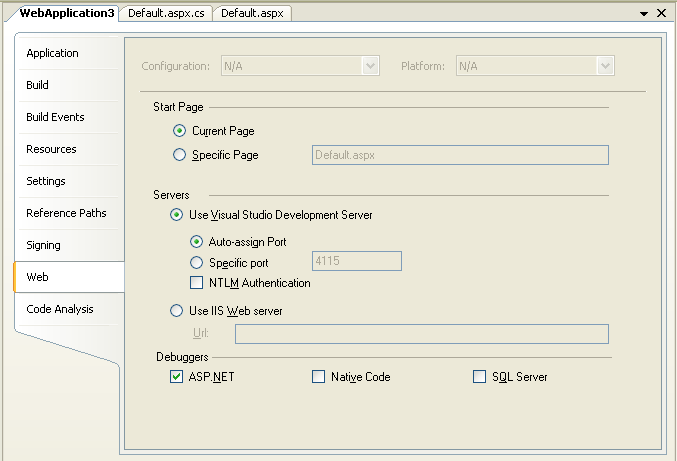 All of these project settings are saved within a standard MSBuild project file.

9) As a last optional step, you can now also choose to use a VS 2005 Web Deployment Project to further refine your deployment of the above VS 2005 Web Application.

Upgrading VS 2003 Web Projects to VS 2005 Web Application Projects

If you choose the Web Application Project option, the upgrade wizard will automatically upgrade the project file format to MSBuild and open the project for you as a VS 2005 Web Application project.  Because the build-semantics are the same as with VS 2003 Web Projects (everything is compiled into a single assembly), no code changes are required.

With both the first and this new refresh of VS 2005 Web Application Projects, this automatic project conversion doesn’t take place yet.  Instead, you need to follow some manual steps to migrate the project file.  These are straight-forward (and take about 5 minutes once you know what you are doing).  I published detailed tutorials with the first VS 2005 Web Application Project preview that show how you do this both for C# projects and VB projects. 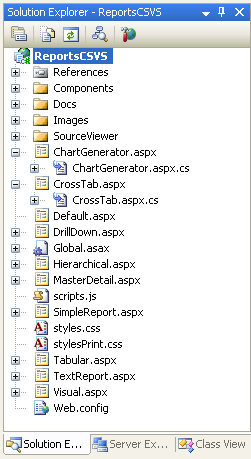 Notice how the pages in the project are still using the VS 2003 style code-behind where there is no .designer.cs file, and the fields are still in the code-behind .cs file.  When you upgrade a project, you can optionally keep this same format and manually update the field declarations if you want (for cases where you want total control over them).

Alternatively, with the new refresh build of the VS 2005 Web Application Project you can also now right-click on a page and choose the new “Upgrade File to Web Application” menu option: 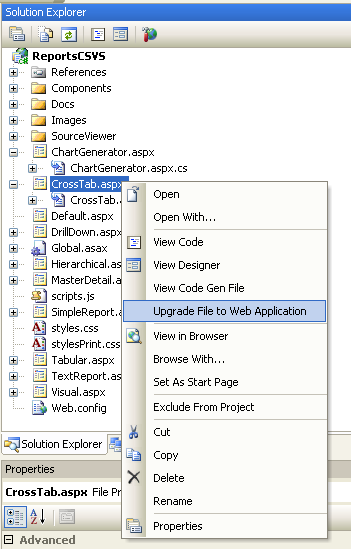 This will cause a .designer.cs file with the control field declarations to be generated and added to the project.  This file will automatically be maintained as you make changes to the .aspx file:

One question I’ve been asked a few times lately has been how much work it will take to migrate an existing page built using the VS 2005 Web Site Project model to run within a VS 2005 Web Application Project.

The good news is that this is pretty easy with this new refresh.  Just follow the following steps:

2) Choose “Add Existing File” on the project and select the page or pages you wish to import into the project (select both the page and the code-behind file): 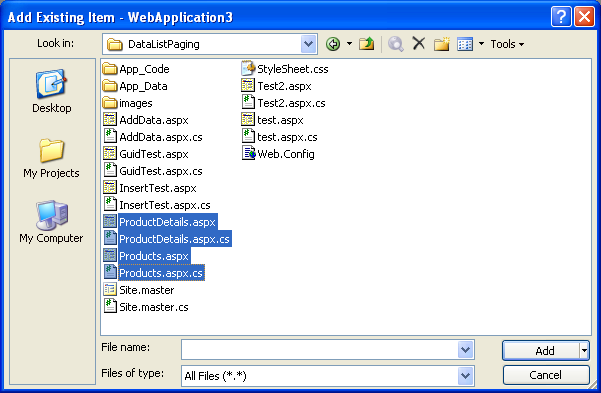 3) You can then right-click on the VS 2005 Web Site Project pages within the solution and select “Upgrade File to Web Application”: 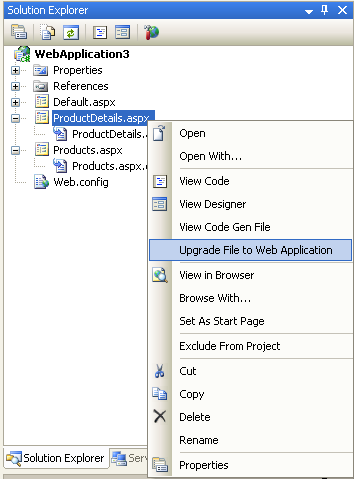 This will generate the appropriate .desinger.cs file for the control declarations, and update the page directive to be “codebehind” instead of “codefile”: 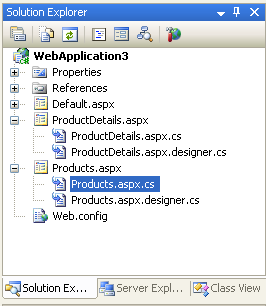 4) You can then do a build or build-solution to compile the project into a single assembly and run it:

The refresh build of the VS 2005 Web Application Project we are putting out this week contains a lot of new feature functionality support.  There are still some features that aren’t implemented yet (we’ll publish a detailed list of these when we make the build available).  Our plan is to finish these out with a build that we put out around the middle of next month (we need to expose a few hooks in VS 2005 via a patch that we'll be putting out then -- which is why not all features are implemented with this week's build).  We will then make it an officially "supported" release (meaning you can call up and get PSS support and fixes), and will include it directly in future VS releases.

Hopefully this week’s build provides a good roadmap for where we are heading, though, and provides the core functionality needed for people to get started and make progress using the new project option today.

I will be updating the tutorials on my http://webproject.scottgu.com site later this week once the new refresh build is out to show how to work with the new features.