This is the eleventh in a series of blog posts I’m doing on the upcoming VS 2010 and .NET 4 release.  Today’s post covers WPF 4.

WPF (Windows Presentation Foundation) is one of the core components of the .NET Framework, and enables developers to build rich, differentiated Windows client applications.  WPF 4 includes major productivity, performance and capability improvements – in particular in the areas of Controls, XAML, Text, Graphics, Windows 7 integration (multitouch, taskbar integration, etc), Core Fundamentals, and Deployment.  This is the first of several posts I’ll do over the coming months about some of the improvements and new features.

I will do a separate post soon that covers some of the major advances coming with VS 2010’s WPF and Silverlight Designer – which also includes a ton of improvements.

WPF 4 adds a variety of new controls that make building rich line-of-business applications for the client easier and faster. The new, richer control set includes LOB essentials such as DataGrid, DatePicker, and Calendar controls. These new controls are 99% API- and behaviorally-compatible with their Silverlight counterparts, enabling developers to create a consistent experience across the client and web while optimizing workflow by reusing code between Silverlight and WPF implementations.

A new WPF Ribbon Control will be available for download shortly after the release of WPF 4. It features skins for Windows 7 and Office, as well as all the standard Ribbon features that end-users are familiar with, including tabs and groups, dynamic resizing, quick access toolbar, application menu, contextual tabs, key tips, and more.

The WPF Ribbon will be fully extensible to meet changing guidelines for future releases. A CTP with a limited feature set is available today here 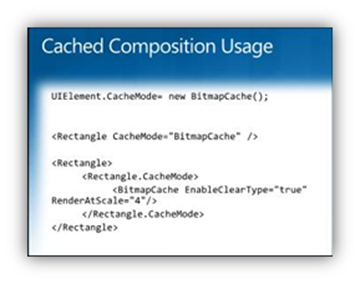 Massive performance wins are possible with the new Cached Composition feature in WPF 4, which allows applications to cache arbitrary content including live and fully-interactive controls, vector geometry, etc. as bitmaps which persist in video memory. Once cached, these elements can be arbitrarily transformed, animated, manipulated, and can have Effects applied, all without having to re-render the cached element.

This spares both the CPU and the GPU the cost of re-rendering content, and instead allows the GPU to render straight from the cache. The cache(s) understand dirty regions, so a blinking cursor in a cached textblock, for example, will only need to re-render the cursor between frames. There’s even a new Brush which specifically uses these intelligent caches – effectively a VisualBrush with vastly better performance.

UseLayoutRounding will force the layout engine to place elements on whole pixel boundaries, thus removing most of the rendering artifacts caused by this problem – which generates cleaner and crisper UI by default.

Discrete, linear, and spline animations were supported with previous versions of WPF. WPF 4 introduces a new concept of Easing Functions – which allows application authors to create fluid behavior using animations. This can be used in an infinite number of ways, such as creating a springy behavior, or adding anticipation to an animation. Easing Functions customize the manner in which animations progress from start to finish.  The built-in easing functions provide a range of behaviors such as circular, exponential, elastic, and bouncy animation progress. The extensibility design also allows application authors to create custom easing functions to define the manner in which their animations progress. With this easy-to-use feature, designers can effortlessly create fluid, organic animations.

The new CleartypeHint attached property allows application authors to enable higher-quality Cleartyped text rendering in many situations where it would have previously been disabled. Such situations include text in layered windows, text in VisualBrushes, DrawingBrushes, BitmapCacheBrushes, and anywhere else where the introduction of an intermediate render target would have previously resulted in grayscale text rendering.

The WPF text rendering stack has been completely replaced – a change that brings with it significant improvements to text rendering clarity, configurability, and support for international languages. The new text stack now supports display-optimized character layout, to produce text with comparable sharpness to Win32/GDI text:

The new text stack allows optimizing text hinting and snapping for either animated or static text. Additionally, the new text stack now supports fonts with embedded bitmaps. This allows many East Asian fonts to render with the sharpness to which Win32 users have grown accustomed.

Since the initial release of WPF, Run.Text has been a normal CLR property. This has meant that Run.Text lacks all the benefits of the WPF dependency property system, most notably the ability to be bound. In WPF 4, we have converted Run.Text to a dependency property allowing developers to use the first WPF supplied bindable Run.  More details can be found here.

WPF includes a spell checker which before WPF 4 only used the OS-provided dictionary for input validation. This has been a major issue for apps which target specific industries with specialized terminology, as those apps were plagued by misspelling notifications. WPF 4 has introduced an API to allow an application to add words to the dictionaries used by WPF for spell checking.  More details can be found here.

In a push to allow rich customization of the look and feel of WPF apps, developers can also now change the brush used to paint WPF text selection and carets via two simple properties: SelectionBrush and CaretBrush: 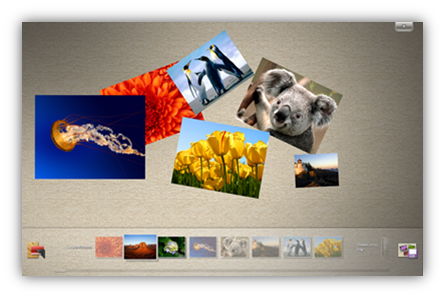 With the introduction of multi-touch input and manipulation processing support, WPF 4 provides a great way to light up your client applications in Windows 7. Multiple finger input are exposed through existing and new input events in WPF 4, while new manipulation and inertia events are now available for developers to use. New features include:

In Windows 7, the taskbar has been redesigned to be less cluttered and to help users perform tasks with fewer clicks. WPF 4 provides integration with the Windows 7 taskbar in XAML, allowing applications to surface useful information to the user from the application's taskbar icon using icon overlays, progress bar, thumbnail toolbars, thumbnail description text, and thumbnail clipping.

There is also a new TaskbarItemInfo class in WPF 4 that is exposed as a dependency property.  It encompasses all the new taskbar features introduced in Windows 7.

Icon overlays allow an application to communicate certain notifications and status to the user through its taskbar button by display of small overlays which appear at the lower-right corner of the button.

A taskbar button can be used to display simple progress information to the user without that user having to switch to the application window itself. Progress bars can be used to track file copies, downloads, installations, media burning, or any other operation that will take a period of time.

Thumbnail Toolbars provide access to the key commands for an application without the user having to restore or activate the window. This feature enables application authors to embed an active toolbar control in a window's thumbnail preview. The application can show, enable, disable, or hide buttons from the thumbnail toolbar as required by its current state: 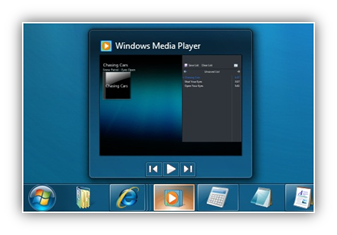 WPF 4 has replaced its implementation of XamlReader.Load(), BAML loading, Control & DataTemplates functionality with a new engine built on top of the new System.Xaml.dll.  As part of this effort, we’ve fixed many bugs and made many functionality improvements. Users of XamlReader.Load() can take advantage of several new language features in XAML2009 such as support for generic types. MarkupExtensions and TypeConverters can now get more services during object graph creation, enabling more scenarios, such as access to the Root object. Tools to analyze and manipulate XAML will also be much easier to create with many of the new low level APIs provided in System.Xaml.dll.

Another new feature supporting the WPF-Silverlight continuum is the VisualStateManager, which introduces a simple new way to apply visual states to controls. This mechanism provides a way to easily customize both the look and feel of a control by providing the means to map the control logic to its respective start and end visual states.

WPF 4 provides the means for direct communication between an XBAP and script in the host HTML page (where the XBAP is loaded in an HTML frame or IFRAME element). The XBAP can get deep access to the HTML DOM, including to any ActiveX controls embedded in the containing HTML page and including handling of DOM events.

WPF exposes the main script object from the host frame. This is a dynamic object that represents the frame’s window object plus any custom script functions and global variables from script in the HTML page. From it, an application can invoke script functions directly or “dot into” the HTML DOM. The functionality is available in partial-trust XBAPs and under all supported versions of Internet Explorer and Firefox.

This is another UIA control pattern added in WPF 4. This pattern could be used by automation clients to track whether the given input event is routed to the correct element by WPF framework. This pattern has three associated automation events, viz. InputReachedTargetEvent, InputReachedOtherElementEvent and InputDiscardedEvent to indicate where the input is handled.

Unlike the .NET Framework 3.5 SP1 Client Profile, an important enhancement in the NET Framework 4 Client Profile is its support on all platforms and OSs, including those supported by the Full Framework like Windows Vista, Windows XP, Windows Servers 2003 and 2008, Windows 7, all for both x86 and x64.

You can view or change the version of the framework that you target by opening your project’s properties window, and then select the "Application" page. You can then change the “Target framework” drop-down to either the full .NET Framework or the .NET Client Profile.  The project Publish property page also allows you to select the prerequisite needed for your ClickOnce deployment. In Beta2, VS2010 automatically selects the correct profile (Client Profile or Full) depending on your primary project target: 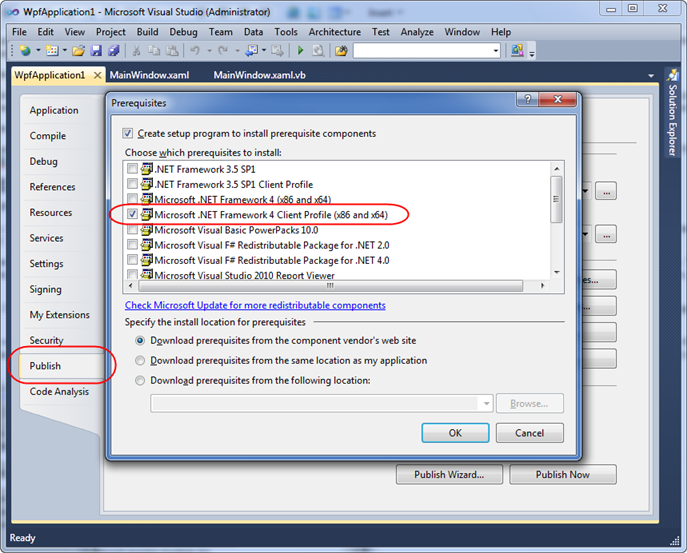 The same prerequisite dialog from above appears when you create “Setup and Deployment” projects (under “Add New Project”/“Other Project Types”). The NET4 Client Profile prerequisite entry is checked by default in this case.

Starting in WPF 4, the ClickOnce elevation prompt is also enabled for XAML Browser Applications (XBAPs) in Intranet and Trusted Zones, making it easier to deploy full-trust XBAPs. For XBAPs that require security permissions greater than the minimum code access security (CAS) permission grantset of the Intranet and Trusted Zones, the user will be able to click 'Run' on the ClickOnce elevation prompt when they navigate to the XBAP to allow the XBAP to run with the requested permissions.

As you can tell above – there is a bunch of great new functionality coming with WPF 4.0.  Below are a few links and resources you can follow to learn more some of these features:

I’ll do more posts in the coming months that also highlight some of the new WPF 4 capabilities and how to take advantage of them.  I’ll also be doing another post shortly that talks about the new VS 2010 WPF and Silverlight designer – which makes it possible to build great WPF and Silverlight applications using a WYSIWYG designer directly within Visual Studio 2010.