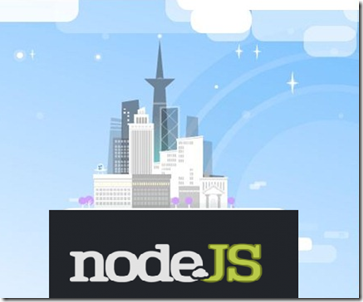 The Node.js website is given the following introduction on Node.js

Node.js is created by Ryan Dahl in 2009 and supported by his employer Joyent. Node.js is an open-source server-side JavaScript platform for  building high performance scalable network programs. Node.js is built on the top of Google's V8 JavaScript engine and the framework is also using other two open source projects  libev and libeio. Node.js uses a non blocking and  event-driven I/O model which provides the ability to handle thousands of parallel operations with greater performance. Node.js is popular for its performance and the Node.js apps are executed on the V8 runtime engine. Node.js lets the developers to write JavaScript programs on the server-side and its provides a JavaScript API to access the network and file systems. Node.js is providing the highly efficient TCP/IP networking features with the support of powerful asynchronous programming model which lets the developers to build highly scalable real-time apps. Ryan Dahl is mainly created the Node.js framework for building highly scalable real-time apps that communicating with larger audience in the web.

Node is not a solution for every problems, but it is a great platform for some specific problems. Since Node is capable for handling thousands concurrent requests, it is a great platform for building highly scalable systems. Node is good platform form building JSON based HTTP APIs, next generation real-time and collaborative web apps, Single page apps, Streaming data and many type of network programs. Today many organizations are adopting Node.js for their server-side stack for the Mobile apps. Big companies such as Linkedin, Walmart, Yahoo, Google and Mozilla are using Node.js for their apps.

You can download the Node.js installer for Windows from here. After installing the Node.js, you can run Node programs from the Windows command-line. The iisnode project which allows to hosting node.js apps on  IIS web server. The documentation of iisnode page is available from here.

npm is a package manager for node.js programs.You can use npm to install node modules created by community. npm manages dependencies of node modules. npm is very similar to NuGet in the .Net. To install a Node module, run the npm command as shown in the below

The following command will install a node module express

The above program will create a HTTP server which will listen for an event in port 8000 at http://127.0.0.1. Let me save this file as server.js. To execute this program, open up Windows command-line and enter the following command:

Here’s a few more links for Node.js and Windows Azure