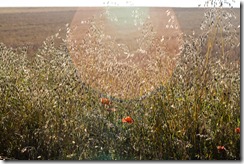 Orchard has its own caching API that while built on top of ASP.NET's caching feature adds a couple of interesting twists.

In addition to its usual work, the Orchard cache API must transparently separate the cache entries by tenant but beyond that, it does offer a more modern API.

Here's for example how I'm using the API in the new version of my Favicon module:

There is no need for any code to test for the existence of the cache entry or to later fill that entry. Seriously, how many times have you written code like this:

Orchard's cache API takes that control flow and internalizes it into the API so that you never have to write it again. Notice how even casting the object from the cache is no longer necessary as the type can be inferred from the return type of the Lambda.

The Lambda itself is of course only hit when the cache entry is not found. In addition to fetching the object we're looking for, it also sets up the dependencies to monitor.

You can monitor anything that implements IVolatileToken. Here, we are monitoring a specific signal ("Vandelay.Favicon.Changed") that can be triggered by other parts of the application like so:

In other words, you don't explicitly expire the cache entry. Instead, something happens that triggers the expiration. Other implementations of IVolatileToken include absolute expiration or monitoring of the files under a virtual path, but you can also come up with your own.