It’s been a while and I said before I wouldn’t post anything again regarding data-access benchmarks, but people have convinced me to continue with this as it has value and ignore the haters. So! Here we are. I expect you to read / know the disclaimer and understand what this benchmark is solely about (and thus also what it’s not about) in the post above.

The RawDataAccessBencher code has been updated a couple of times since I posted the last time, and it’s more refined now, with better reporting, more ORMs and more features, like eager loading.

The latest results can be found here. A couple of things of note, in random order:

I almost forgot to show an interesting graph, which is taken with dotMemory profiler from Jetbrains during a separate run of the benchmarks (so not the one taking the results as profiling slows things down). It clearly shows Entity Framework 7 RC1 has a serious memory leak: 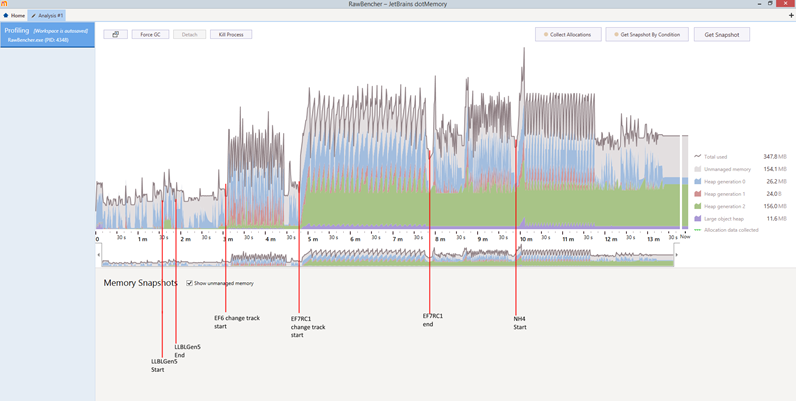 As some people can’t view pastebin links, I’ve included all results (also from the past) as local files to the github repository.