Let's first look at my attempts last year to get a Windows Store dev account. If you're in a TL;DR mood: it was a sucky experience and one has to jump through burning hoops to sign up.

It's now a year later and I have done absolutely nothing with this account. I signed up a year ago to see whether writing Windows Store apps was a future worth exploring. During the past year though I decided I don't want to write software for WinRT, simply because I find the .NET version Microsoft has released for WinRT beyond crap and I don't want to go through a Compact Framework nightmare yet again. Furthermore, I became convinced that WinRT has no future or at least not a future I want to be part of, so the account was unused.

This morning I received an email, in Dutch, with the subject (translated) 'Automatic renewal of yearly subscription of Windows Store developer account'. It actually has a typo in the subject, it says 'acocunt'. That was initially a red flag for me but as I only read emails in plain-text and all URLs are MS URLs, the headers all check out, it's a legit email.

I thought "Automatic renewal?" I haven't signed up for automatic renewal! The email says that in September my account will be converted into a yearly subscription, but after it's been renewed. I don't want to renew it, as I won't be doing anything with it anyway. So I read on how to cancel the damn thing and see I have to go to https://commerce.microsoft.com, sign in, click on the service, then click 'Cancel subscription' and then it's canceled. Now, please pay attention, as I missed it the first time. It says "Cancel subscription". But at this moment I have a 'yearly registration' as a Windows Store developer.

Ok, I go to https://commerce.microsoft.com and sign in. I click on 'Subscriptions' and see a list of my XBox Live activities. No Windows Store account anywhere. It takes me a while till I realize that at the top right, there's a tiny triangle next to 'Personal account'. Clicking it, it reveals a menu which allows me to select 'Business account'. And there is my Windows Store registration.

I click on Manage and am greeted with a pop-up: (warning, Dutch text ahead) 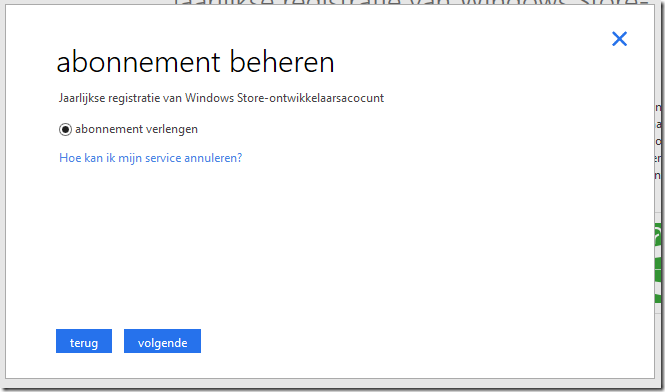 The title says "Manage account". Below it it says "Yearly registration of Windows Store developers account". The only option to select says "renew/extend subscription".

There's no option to cancel the registration. The link below it says "How can I cancel my service?". Yes, I really want to know that, Microsoft, as you just presented me with a radio-button list with one option. Boy, the amount of developer time spent on this UI must be astronomical!

There's little else to do than to click the link which states the single question on my mind. Unsurprisingly, this brings you to the generic help menu about canceling something, and of course, no mention of Windows Store developer accounts anywhere in the selection boxes I have to work with on that unhelpful page.

Desperately, I pick the 'closest' choices to what I want to accomplish, and end up with a screen which tells me I have three options: go to the forums (hahaha, you got to be f****** kidding me), use the chat (which is open between 08:00 and 21:00, so it's open now, but oddly the button is disabled), or click a button so Microsoft will call me. I don't want to give a person calling me a hard time, so calling me is not an option. I try again, different options in the help selections and, out of the blue, I can click the 'chat' button now.

I'm currently waiting before this chat person/robot is able to help me. I'm currently '1' in the queue (literally, that's what it says).

Needless to say, this whole experience sucks to no end. First the sign-up was terrible, every time you want to log in you have to wait for an email with a code, the platform they tell you to use is so limited, the OS API on my Amiga 500 was more capable of doing things than WinRT and last but not least, they have the nerve to automatically renew your registration and cancelling is impossible (from their UI at least). I now have to spend time to get rid of something that's shoved through my throat.

UPDATE: Via their chat, a guy called 'Adriaan N.' was able to cancel the registration and renewal. I have notified them about how it's impossible to do this manually, and, helpdesk-savvy as he was, this was duly noted. If it has any effect, I doubt it, but it didn't hurt to try.

For the few who wonder why on earth I don't want to write software for WinRT, as it appears to be awesome to them, let me say this: There's a company called Xamarin, which is able to provide a full .NET API, including full C# features, on iOS, Android, Mac and Windows. Not a crippled one, but a full one. Microsoft on the other hand, stranded in the ever lasting war between DevDiv and WinDiv and was unable to provide a better API for C#/.NET than the one they provided for WinRT. There are no excuses for them for this. If Xamarin can do it for multiple platforms, including two mobile platforms, Microsoft should be able to do it for one, their own, no less. It doesn't bode well for the future of .NET if you look at WinRT, and as I care more about .NET than I'll ever do for WinRT, it's simple: the less apps are written for WinRT, the better. Perhaps then, Microsoft will learn what it really takes beyond yelling "Developers! Developers! Developers".