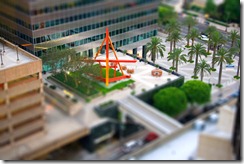 Yeah, it's one of those posts, sorry.

First, the mildly depressing: the most popular post on this blog this year with 47,000 hits was a post from last year about a fix to a bug in ASP.NET. A content-less post except for that link to the KB article that people should have found by going directly to the support site in the first place.

Then, the really depressing: the second most popular post this year with 34,000 hits was a post from 2005 about how to display message boxes on a web page. I mean come on. This was kind of fun five years ago and it did solve one of the most common n00b mistakes VB programmers trying to move to the web were making. But come on, we've traveled about 4.7 billion miles around the Earth since then. Do people still do that kind of stuff? I should probably put a big red banner on top of this post.

Oh [supernatural entity of your choice]. Hand me that gun, please. Third most popular post with 24,000 hits is from 2004. It's about how to set a session variable before redirecting. That problem has been fixed a long time ago. Oh well.

The fifth one (20,000 hits) is an old post as well but I'm kind of fond of it: it's about that photo album handler I've been organically growing for a few years. It reminds me that I need to refresh it and make a new release. Good SEO title too.

Back to insanity with the sixth one (16,000) that's about working around a bug in IE6. IE6. Please just refuse to pander to that browser any more. It's about time. Let's move on, please.

Actually, the first post from 2010 is 15th in the list. We have a trio of these actually with server-side image resizing and FluentPath.

So what happened? Well, I like the ad money, but not to the point that I'm going to write my stuff to inflate it. Actually I think if I tried I would fail miserably (I mean, I would fail worse).

What really happened this year was new stuff: Orchard, FluentPath and the stuff with the Netduino. That stuff needs time to get off the ground but my hope is that it's going to be useful in the long run and that five years from now I'll be lamenting on how well those posts are still doing.

Oh, and I was on This Developer's Life this year! Yay!

Anyways, thank you all for reading me. Please continue doing that. And happy 2011!