Recently I tried to show my Mom some websites I built when I was a kid. Those ASP code, some in VBScript while some in JavaScript, are more than 10 years old. They were running fine in PWS, but now they didn’t run in IIS 8.5. I have no idea what’s the problem. It seems a little debugging has to be done.

In addition to supporting ASP.NET, IIS Express also supports Classic ASP and other file-types and extensions supported by IIS – which also makes it ideal for sites that combine a variety of different technologies.

After searching and trying things around, using Visual Studio and IIS Express seems to be the easiest way to run and debug ASP websites:

Now the website can be debugged in Visual Studio: 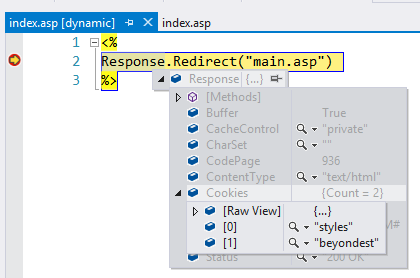 And Solution Explorer shows the triggered .asp files, and how each .asp file includes other files. 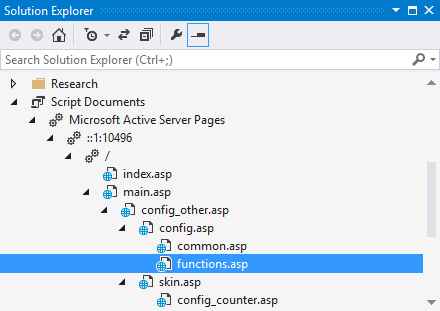 However, if the website is directly started with debugging (F5), Visual Studio will attach to native code or managed code. We have to start the website then manually attach to script code, as MSDN mentions:

This is why in Step 4 we do not start with debugging (F5).

As the second last picture shows, the index.asp has a [dynamic] tag. Visual Studio does not automatically map it to index.asp from the file system. This means, if a breakpoint is set in a *.asp file, it won’t trigger when running the website. You may have to go back and forth between dynamic file and static file. To have the mapping automatically, IIS is needed.

Here are the steps:

With this approach, the created . file and Web.config file pollute the website folder. Instead of application, If creating/opening website in Visual Studio, it works the same as IIS Express. application has to be created so that Visual Studio can map to the static .asp files in system during debugging.