Sitting for the first session as we're going through the XNA session with Pat McGee. The session was an intro to XNA (and filled with a room full of guys who haven't done any XNA work so it was a good audience) but was fun with the people involved. 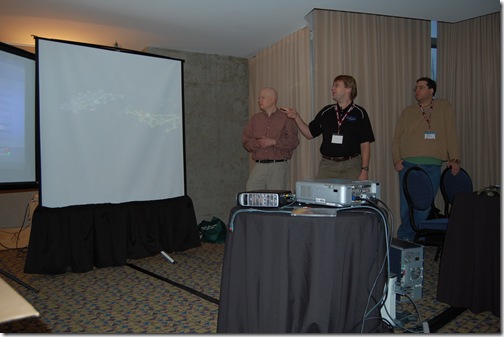 XNA on Xbox requires you to be connected to XBox Live and the Xbox networking was down so the guys couldn't demo anything on the XBox. However the fallback plan was to demo some networking on the laptops they had (of course when you come for an XNA demo you bring extra laptops and Xboxes, it's all about the hardware). Luckily it was John "The Pimp" Bristowe who saved the day and got the Xbox hooked up to the network so the demos were good to go.