Shel Silverstein wrote he wanted to be famous by getting his picture on the cover of The Rolling Stone. How about getting a photo spread in Fortune Magazine before you’re two years old? 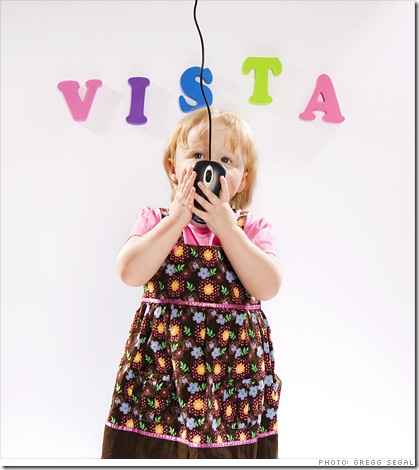 This months Fortune Magazine is running a 12 page photo article called True Obsessions. It’s a series of portraits of people who take their favourite brands seriously. We’re both pleased and proud that our daughter Vista made the article. You can see her two pages of fame starting here. Sharing the spotlight with Vista are are couple that live the Mountain Dew dream; a family with a passion for John Deere products; a Harley Davidson headstone; a 25 year veteran Coors collector; and Weird Al Yankovic and his crazy shoe collection. The web version of the article is online now and the print version comes out in a few weeks. Needless to say you won’t be able to buy a copy of Fortune Magazine in Calgary in May. Sorry about that.

On March 30th I got an email from a reporter, Beth Kowitt, at Fortune Magazine. They were working on a story about loyal customers and people who go above and beyond in showing loyalty to a brand or product. Beth and I exchanged emails and I said I was interested. After a brief chat on the phone the wheels started turning and the machine began. Let me tell you they don’t waste time with these articles. I suppose it must be the speed of the Internet but within 4 days the photo editor contacted me, they had lined up a photographer to “hussel up to Calgary” by the 11th of April and the article would be online by the end of the month and in print for early May. Internet speed indeed!

There was little we had to do to get ready. It was just a waiting game. Beth and I exchanged emails about logistics and whatnot and we provided her with the back story on why she was named Vista, my connection to Microsoft, her middle name, and all that good stuff. Finally it was Easter and the shoot was upon us.

The day came and the photographers were here. The photographer for the shoot was Gregg Segal and in tow was his trusty sidekick, Dylan. For the shoot we opted to use Grandma and Grandpa’s house. This was out of convenience (they only live 10 minutes from the airport) and the fact that we have two over ambitious cats and two equally obnoxious dogs. Shooting at our house would have been Doctor Doolittle meets The Spanish Inquisition. It’s an hour drive in from our house but in the end I think it was worth the effort.

The magazine sent along some props for Vista to use, namely a set of diapers with the Windows Vista logos on them and some onesies with the words “I’m a PC” on them. There was also a necklace with Vista’s name spelled out in blocks and stuff like that. It all sounded great too. Unfortunately when the photographers showed up, the props were nowhere to be found. They were enroute via courier. The problem is that here in Canada, Easter Friday is a holiday so no delivery for you!

We shifted into creative mode. I headed out to Future Shop to buy a Microsoft mouse and keyboard, Jenn headed out to the craft store to get some letters and other props. We also got the bright idea to see if we could get our own T-Shirts made up. In the end we picked up a set of iron on transfers that we printed out the Vista logo onto and made our own. By the time we got back, the boys had unloaded what seemed like an entire truckload of equipment. I knew there was going to be lights and such, but sheesh. There was enough stuff there for 10 photo shoots!

Descending into the in-law’s living room like an army of ants, things were setup, plugged in, and wired together. It looked like Kodak threw up in their living room, but hey it was impressive. Vista didn’t mind either. BTW, if you notice below on the TV the curling championships were underway (with Canada leading the charge). The photographers were curiously fascinated at the curling and couldn’t take their eyes off of it, much like a weird car crash but with ice and stones. 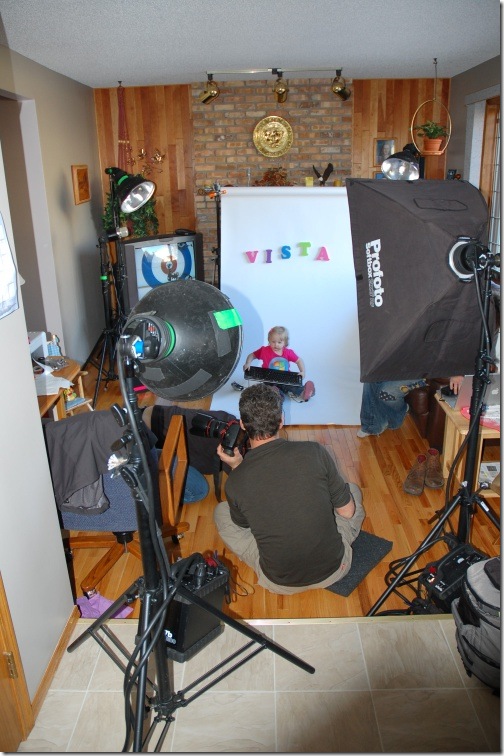 The shoot went well and a bit of an out-of-body experience. We shot for 2 or 3 hours on Friday as the team had to head off to Pittsburgh on Saturday. The initial shoot was against a backdrop and ended up producing the main photo for the article. I think the boys must have snapped about 200 pics that night, burning through memory cards like kindling. Vista was an absolute superstar that night. At one point she had a bit of a “Diva” moment. I think she had enough of the mouse dangling in front of her face and said “All done” (Signing Time style) and walked off the set. Literally.

The next day we had two setups, one with her sitting at a small table we have for her (along with Jenn’s very pink laptop). Luckily we grabbed a copy of BabySmash to load up on it and both Vista and the photographers got a kick out of the laughter coming from Vista and the computer. Another couple of hours of shooting but I think V was catching onto this whole photography thing. She wasn’t too into it but was a real trooper. We finished a setup at the dinner table with two laptops, Vista, myself, and a box of Techie Crunch cereral (a prop from my Tech Days presentations). It went over well (we had real food in the bowl for her to much on) but of course time took it’s toll and she was done. 6 hours of photography over 2 days is about her limit but the guys got some great shots for the article.

The props? Well, one box did show up on Saturday via FedEx. They contained some “Vista” branded diapers (basically the same thing we did with the t-shirts using iron on transfers) and the necklace with her name spelled out. Unfortunately we have a ginormica child so 24 month diapers don’t cut it for her. She’s reaching Amazon status (the race, not the website) and wearing size 6 diapers. The other props showed up at our house about 3 weeks later. They came from Cafe Press and were nice, but again, fit for a “normal” 24 month old. Vista is a wee bit bigger than that so they’re making for some nice teddy bear and doll clothes. Thanks Fortune!

Coming Soon To A Magazine Near You

So what’s next for Vista? Time? Life? National Geographic? Nah.