Well, I'm not really a Vancouver Virgin. I've been here a few times. Never for a conference though. And this is the first time DevTeach hits Vancouver so hey, the title sticks and it's my blog so deal.

Here we are again kids, first day of the conference and man it's been a day. It's 3:22 when I'm starting the blog and we've been going all night long. This poor old tired body can't take much more and I think I'm going to be skipping the 7:30 breakfast call tomorrow morning. I've already put the Do Not Disturb sign on the door and won't be getting up until Thursday. Unfortunately other MVPs were a little less happy-go-lucky than I was and fell by the wayside throughout the night. More on that later.

So sit back for the next few days and again live vicariously through Unka Bil's blog, a train wreck full of fun, adventure, and photos that should have been confiscated at the bar.

I did arrive in Vancouver pretty uneventful. There was a Santa Claus parade during the day so of course traffic was a gong show. The only redeeming quality was the fact I could harass the locals when they asked me questions I couldn't answer. 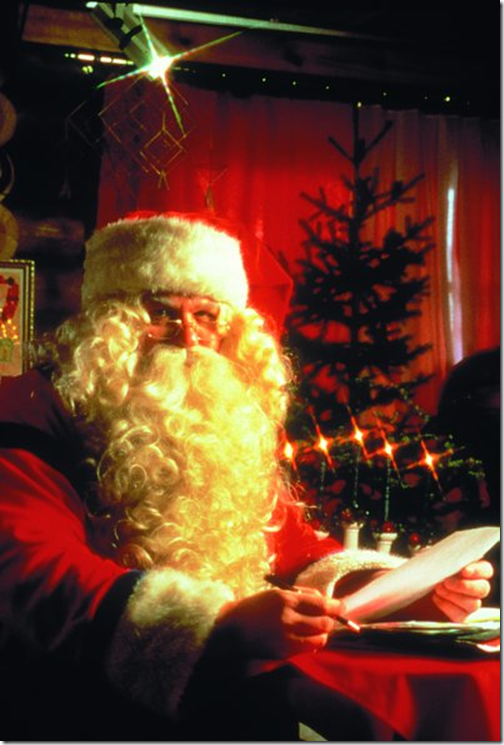 Outside of the local Subway a couple asked me what all the commotion was about and why all the traffic delays. I had a hard time swallowing that locals wouldn't know about the parade, especially since they had parade bags and one of them had a parade scarf. This of course brought out the insane Calgary guy in me with the only response I could think of that was appropriate.

"It's aliens! They're taking over the downtown core!! Run for your lives."

At which point I tore off down the street and around the corner. Not sure if they followed but later at the market they were nowhere to be seen so I assume they found their own evacuation route.

Dinner with the MVPs

It was a great dinner at Steamworks with Microsoft, the MVPs (about 40 of us), and the user group leaders from around (Vancouver, Victoria, Edmonton, and even Saskatoon!). Of course as I turned around and checked a few tables out, who is the only person at a table with a laptop? Oren.

No doubt masterminding another new Rhino Mock feature that we'll all hear about tomorrow (or is yesterday, I always get that confused).

The other event for the night was the quote that almost had me spewing my drink at dinner. Of course it appeared courtesy of Justice as we were talking about and exchanging business cards.

Yeah, it was going to be a long night... 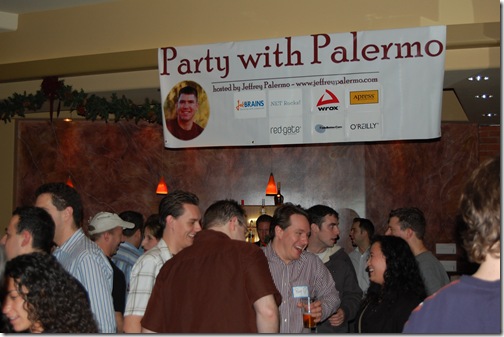 Jeff, as usual, kicked off an awesome party. Looked like around 100 people crammed into a small room but then I was never good at guessing numbers. Books were given away, hats were thrown into the crowd (literally), and this lucky winner walked off with a ticket to DevTeach after picking a number between 1 and 1000. 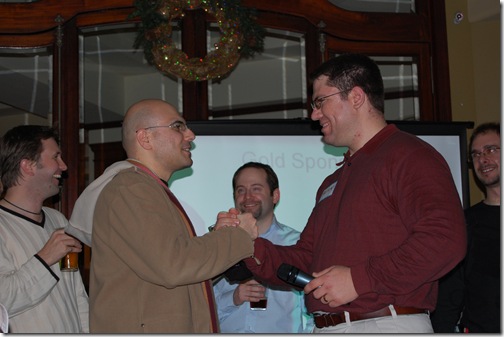 During the course of the party, much rejoicing went on. Here I caught Kyle and Justice together although I'm still not convinced they're separate entities: 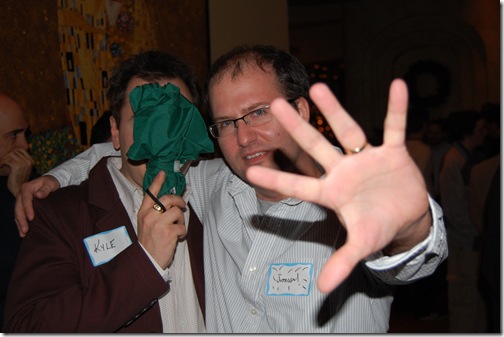 Beth Massi, ex-MVP now softie was out and about with the guys having a great time: 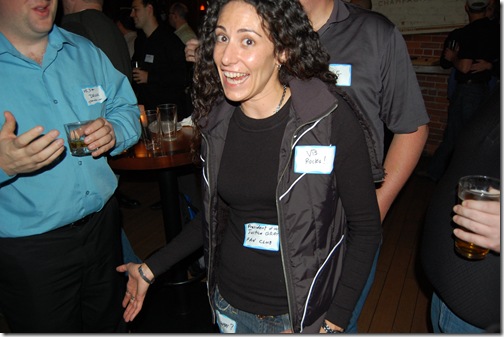 It seems everyone at the party was somehow affiliated with the Justice Gray Fan Club. In fact, I tracked down this little fellow who's not only the president, but he's also a member:

Our own Justice Gray won a copy of JetBrains ReSharper. Now we think it'll make him a better developer, but we can only hope. 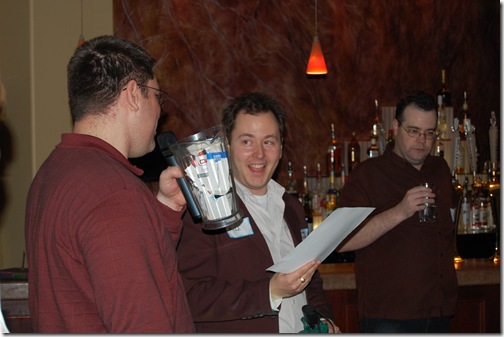 David Laribee explains the finer workings of Domain Driven Design to Jeremy Miller, while James Kovacs and our own Canadian MVP guy Sasha looks on. 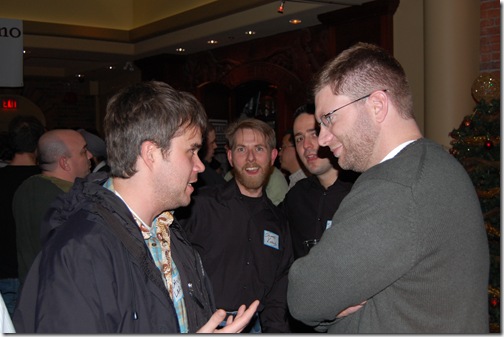 Just ask our Igloo coder, coming off his worldwide tour. He wasn't looking too good. Luckily I don't have a wife factor I have to deal with when it comes to publishing incriminating photos on the net or talking bad about him and his evil whiskey ways. Pictures speak louder than words. 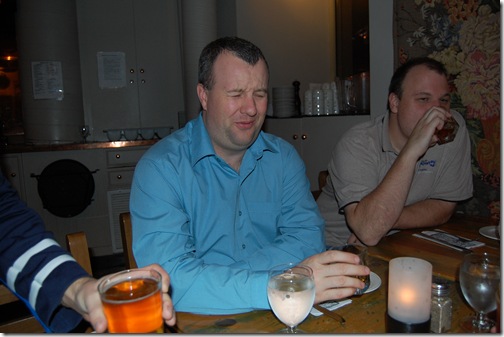 Who knows? It's late.

We polished off the bar then headed up Robson street in search of food which was delivered unto us in the form of Earls. Ahh, bless Earls and they're burgers and, well, food stuff. Along the way sort of picked up Greg Young who schooled us on DDD (as he should) and met the lovely and talented Dave the Chef and Emma the Social Butterfly (who's aspiring to work in Client Service). Good food, good conversation, and good times.

So it's late and most geeks are in their beds sleeping away. Others are furiously hammering on their keyboard (no, not *that* hammering) trying to get their presentations "just right". Oren is probably still jet lagged and re-writing Rhino Mocks to incorporate .NET 3.5 features. And the rest of us, well, we're just trying to make it through to the next day...

For the rest of the trip, you can view my entire Flickr set of DevTeach 2007 Vancouver here.

I'll be blogging from the floor during sessions and trying to keep things moving here at Fear and Loathing Central. I'll also be outfitted with my new Eye-Fi card. This is an uber-cool (geekwise) SD card that you setup with a network to upload to Flickr (or some other service, I chose Flickr) as you take the pictures. Yup, it means mere moments after I snap a picture on the DevTeach floor it'll be in your hot little hands courtesy of Flickr and a $100 SD card. Very slick.