If you’re doing any work with Python you might need a user interface as Python doesn't provide one. Once such interface is provided by the GIMP Toolkit (GTK) in the form of Python bindings called PyGTK. PyGTK is actually made up of three dependant libraries:

Installing these bindings on an x64 system (XP, Vista or Windows 7) makes for a challenge. After installing Python 2.x you might find yourself staring at this dialog when you try to install any of these libraries:

What’s happening is that the installer is looking in the registry for an entry to find where Python is installed. You might be looking at your registry and see this under the HKLM node: 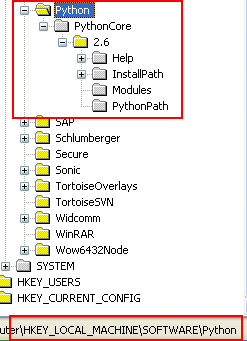 While this node is valid (it’s what the Python 2.x installers create) it’s not what the installers for PyGTK are looking for.

There’s a quick fix you can do to get going.

Right click on the existing HKLM\SOFTWARE\Python node and choose Export. Now edit this file and add “Wow6432Node” between “SOFTWARE” and “Python”. So this:

Do this for all of the HKEY_LOCAL_MACHINE lines and save the file.

Now back in the Registry Editor click on File | Import. Select the file you just saved. A dialog will appear saying the information has been successfully imported into the registry (you could also double-click on the .reg file and confirm the import).

Now view the HKLM\Wow6432Node in the Registry Editor and you should see the newly imported Python node. 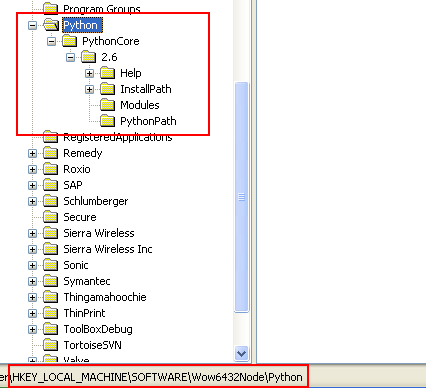 You can now run the installers and they’ll find where Python is installed and complete for you.

BTW, you could also import this into HKCM (the node for the Current User) but that only works for that specific user and you might want to do it for all users. If you do choose to go the HKCU route, make sure you edit the path correctly in the .reg file as it needs to be [HKEY_CURRENT_USER\SOFTWARE\Python] not [HKEY_LOCAL_MACHINE\SOFTWARE\Python].