I was bugging Scott Hanselman about his Ultimate Tools List on Friday. The guys at the office were talking and we thought it would be more valuable to find out not what Scott recommends, but what he's using (and how much). The last check he was trying to track some of it, but his latest results were "Visual Studio". Then I stumbled onto Wakoopa, which really looks interesting as you pull back the covers.

Wakoopa is yet-another-social-networking site but in disguise. Wakoopa tracks what kind of software or games you use, and lets you create your own software profile. It does this by having you run a small app in your tray and it tracks what you're running. Fairly simple concept. It's when you start logging your work and you see the results is where IMHO it kicks social networking up a notch.

Rather than me going onto say Facebook and setting up my profile with my interests, what games I play, etc. Wakoopa sort of does this for you. Then combined with the results of every one else on the site, shows you what's going on. I've been running it for a couple of hours, just ignoring that it's there. Then I went to my personal Wakoopa page and found a wealth of information, not only about me but well, everyone.

The main page contains a scrolling marquee of all the apps people are using. Of course, when you have information like this to mine you use it. So there's a list of the most used titles (including World of Warcraft in the top 10, figures) and some newcomers, popular titles that are just gaining momentum with enough people. Each title has it's own dedicated page with some stats and a brief description. I was intrigued by a title called Flock as I had never heard of it and it turned up on the most used page so here's it's page. In addition to the stats, there are user reviews and a list of who's using it.

It even creates a cloud tag on your personal profile page about "what you do". Here's mine: 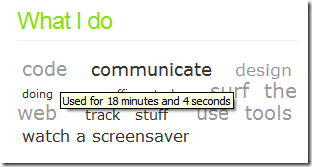 The mouse cursor isn't present in my screen grab, but I was hovering over the "code" tag, indicating I had been using various tools relating to coding for 18 minutes and 4 seconds. The other tags are interesting. Obviously communicate relates to Outlook (which I generally have running all the time). Surf the web are my IE and Firefox windows and the screensaver kicked in so it tracked that (that feature should probably be turned off, as everyone will be doing this). The usage page lists what you're actively using, but since the little widget is running on your desktop it has access to everything so items you have running in the background are separated out and listed here too.

The "kick it up a notch" aspect to all this, is on your profile page where it suggest software you might like (based on your own usage and popular titles others are using) and goes so far as to list "people I might like". Of course I'm not going to go out and make friends with DynaCharge1033 just because they use Notepad++ too, but it's a nice feature.

All in all, Wakoopa is an interesting twist on what you do and providing the ability to share that information. Here's hoping to see this little community grow and expand and maybe provide services for others to hook into. Then we'll get into some serious cross-pollination of social aspects across multiple contexts, which is something I think the whole social networking scene might be missing.