It's the second day here with JP and crew. Yes, posting on the 4th day isn't quite right is it, but 12 hours locked up in a room with JP is enough to drive anyone to madness. Really though, it's just completely draining and for me I have an hour transit ride and a 45 minute drive to get home so needless to say, sometimes I get home and just crash. Anyways, expect days 3 and 4 to follow later today.

Okay so back to the course. After the gangs morning trip to Starbucks we're good to go for the day (and it's going to be a long one).

Small tip for those using these patterns, decorators must forward their calls onto the objects they're decorating, proxies do not have to. So if you have some kind of proxy (say to a web service or some security service) the proxy can decide whether or not to forward the call onto the system. When using decorators, all calls get forwarded on so decorators need to be really dumb and the consumer needs to know that whatever it sends the decorator, it'll get passed down the line no matter what. Good to know.

I'm always happy seeing new stuff with ReSharper and I don't know why I didn't get this earlier. NAnt support in Visual Studio with ReSharper. Oh joy, oh bliss. I was struggling with NAntExplorer, which never really worked. I never realized ReSharper provides NAnt support, until now. Load up your build script and hit Ctrl+F12 to see all the items, or do a rename of a task or property. Awesome! 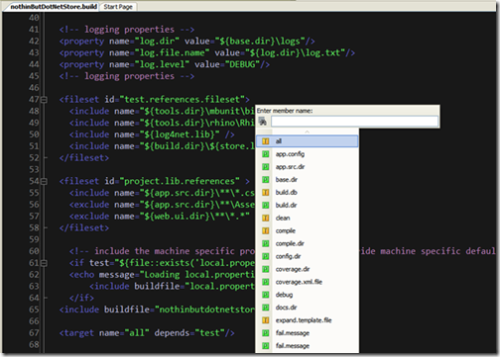 A new tip I picked up is using local property files and merging them with build scripts via NAnt. Traditionally it's always been a challenge when dealing with individual developers machines and setups. Everyone is different as to what tools they have installed, where things are installed to, and even what folders they work in. A clever trick I've done (at least I thought it was clever) was to create separate environment configurations with a naming standard, then using post-build events (NAnt would have worked as well) and copying them as the real app.config or web.config files. This is all fine and dandy, but still has limitations. I think I've found a utopia with local property files now.

So you have your build script but each developer has a different setup for their local database. Do you create a separate file for each user? No, that would be a maintenance nightmare. Do you force everyone to use the same structure and paths? No, that would restrict creativity and potentially require existing setups to change. The answer my friend is blowing in the wind, and that wind is local property files merged into build scripts to produce dynamic configurations.

Typically you would create say an app.config file that would contain say your connection string to a database. Even with everyone on-board and using a connection string like "localhost", you can't ensure everyone has the tools in the same place or whatever. This is where a local property file comes into play. For your project create a file called something like local.properties.xml.template. It can contain all the settings you're interested in localizing for each developer and might go like this:

In this case I have information like where my tools are located, what account to use for security, and what my connection string is. Take the template file and rename it to local.properties.xml then customize it your own environment. This file does not get checked in (the template does, but not the customized file).

Then inside your NAnt build script you'll read this file in and merge the properties from this file into the main build script. Any properties with the same name will be overridden and used instead of what's in your build script so this gives you the opportunity to create default values (for example, default database name). If the developer doesn't provide a value the default will be used. The NAnt task is simple as it just does a check to see if the local properties file is there and then uses it:

That's it. Now each developer can have anything setup his own way. For example I only have SQL Express installed but the others have SQL Server 2005 installed. We're all using the same build scripts because my local properties file contains the path to osql.exe that got installed with SQL Express and my connection string connects to MACHINENAME\SQLEXPRESS (the default instance name).

Finally, these values are used to spit out app.config or web.config files. The key thing here is that we don't have an app.config file inside the solution. Only the a template is there which is merged with the properties from the build script to generate dynamic config files that are specific to each environment (and again, not checked in to the build).

BTW, the whole build process, build scripts and differences from deployments could be an entire blog post so I don't think I'm finished with this topic just yet.

I'm a huge fan of Notepad++ and use it all the time. I have it configured on my system to be the default editor, default viewer for source code in HTML pages, and well... the default everything. I was a little surprised when our build ran the MbUnit launched Notepad. Nowhere I could find a place to change this and I'm told that it's using the default editor. That's a little odd to me because Notepad++ is my default editor. So maybe someone has info out there as to how to get it to launch my editor instead of Notepad? Either that or I need to physically replace Notepad.exe with Notepad++.exe (which can be done, instructions on the NP++ site).

New Cool Tool of the Day

Console2. When I launch my command prompt, it's a giant glowing screen of goodness. I'm a bit of a console junkie as I find I can get a lot more done by jumping around in the console rather than hunting and pecking in something like Windows Explorer. I got a tool from JP called Console2 by Marko Bozikovic which makes my command line experience that much better. It's not really a cmd.exe replacement but rather a shell that runs cmd.exe. However the really cool thing here is that a) it can launch any shell you want (like PowerShell) b) supports transparency (even under Windows XP) and c) it has a tabbed interface. It's like a command line ala Firefox (or that other browser that has tabs). 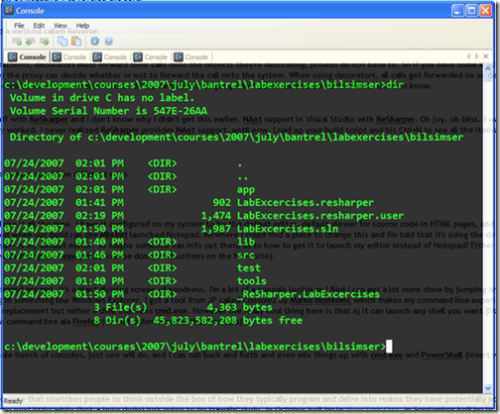 Now I don't have to launch a whole bunch of consoles, just one will do, and I can tab back and forth and even mix things up with cmd.exe and PowerShell (insert whatever shell you like here as well).

Another draining day but full of good things to inject in your head. I can't say enough praise for this course, although things are moving along much slower than I would like them to, it's still a great experience and I highly recommend it for everyone, even seasoned pros.

As I mentioned before, I'm trying to get away from the mouse. I have always found the mouse to be a problem. It's the context switching from 1. take hand away from keyboard 2. move hand to mouse 3. move mouse 4. move hand back to keyboard. Bleh. Yesterday was a mostly-keyboard day, today I'm going commando with all keyboard as I have my mouse locked up and hopefully won't need it at all.

JP is doing this 5-day intensive course that stretches people to think outside the box of how they typically program and delve into realms they have potentially not event thought about yet, about one per month. For the next little while (he's a busy dude) he's going to be travelin' dude. In October he'll be in New York City. In September he'll be in London, England and other locations are booked up into the new year.

If you want to find out more details about the course itself, check out the details here and be sure to get on board with the master.